View of the eastern façade of the Castle

The white storks colony, one of the attractions in the Park

View of the Lake

"La Visual", in the Park

Designed by French-Belgian landscape architect François Duvillers, this is a historic park that conserves the essence of its origins.

In 1875, the Counts of Rocabertí refurbished the medieval military fortress, converting it into a French-style château. Next to the new palace, the Counts decided to place a park, making use of their own adjacent land known as “lo Bosch del Comte”, along with different gardens and orchards, which they obtained from the small landowners of the town, in exchange for other plots of land and haylofts.

Duvillers’ original plans included 158 varieties of plants and trees. Indeed, this was an excessive number of species that did not fit in with the reality of the occupied and vacant spaces of the plans. The park’s designs featured as many as 61 different areas, including the orange orchard avenue, a maze, a cricket field, a gym, a summerhouse, the gardeners’ shed and a cave. Not everything was built, nor was everything planted at first. Some of the spaces and botanical species have disappeared through time, while other elements have been added gradually, in keeping with the needs and wants of the new owners. These include the lake (Marquis de la Torre, 1909) and the auditorium, which accommodates the International Music Festival.

Along the tour we’ll come across different species of trees and plants, including a singular holm oak, historical features like mudbrick and river stone gutters and stairs, statues, benches, bridges, lake and ponds, winding paths, unique spaces such as a French Garden complete with rose beds, an old greenhouse, a Romanesque patio…all in a park with a distinct landscaped style.

Today, the park is home to a noteworthy white stork colony, thanks to a recovery project that was launched in 1996, in cooperation with the Aiguamolls de l’Empordà Nature Reserve. Since then, the colony has continued to grow. We’ve located 35 nests and 58 offspring.

You will also enjoy the 19th-century aviary, which is inhabited by pheasants and different species of doves; the cave, which was built in 1877; and finally, the striking medieval façade of the castle. Coming along?

It is a historical park that preserves the essence of its origin, designed by landscape architect Franco-Belgian François Duvillers 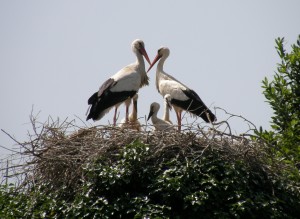